Australian building companies are going bust in the face of rising costs, with a second Perth construction firm going under in days.

The formal appointment of liquidators for Home Innovation Builders was lodged with the Australian Securities and Investments Commission on Monday.

The application was made on Friday, the same day another Western Australian company – New Sensation Homes – was placed in the hands of WA Insolvency Solutions.

Now many clients face an anxious wait over what will happen to their homes.

Many clients face an anxious wait over what will happen to their homes after the collapse of a building company. Pictured is a female tradition 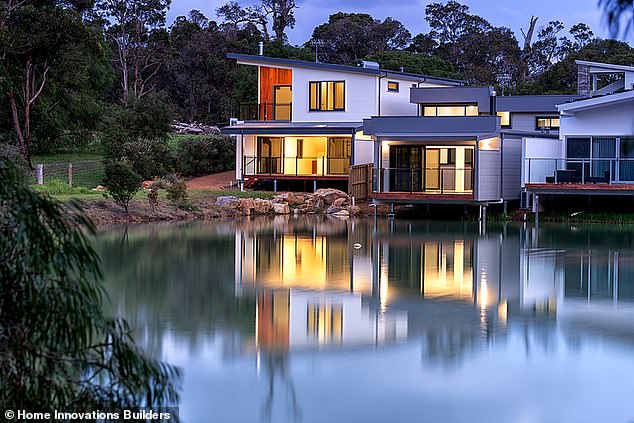 Pictured is a home in Western Australia built by Home Innovations Builders, which has gone bust

A client of Home Innovation Builders said she had a feeling the company had been in trouble for a while.

Tiarna Nouwland has a slab and a pile of bricks at her property at Gabbadah, north of Perth, instead of a home for her family of six.

‘Unless we can come up with close to $ 300,000, we may have to sell the lot and take a loss,’ Ms Nouwland told The West Australian.

Skyrocketing prices of commodities have Australian tradies struggling to make ends meet, with thousands of businesses at risk of going bust.

Gold Coast firm Condev, Brisbane-based Probuild and Hobart’s Hotondo Homes are among the other companies to collapse in 2022.

Supply chain issues and lack of stock from national and international sources led to a spike in demand and prices for materials, with tradies bearing the brunt.

Costs of metal ores, plastics and timber have been consistently rising for years, but particularly through the pandemic as factors were forced to shut down for extended periods.

The trickle-down effect of these surging costs mean Australian workers are forced to cover the difference, with the country on the verge of a major crisis.

‘Smaller businesses don’t have the cash flow, they don’t have the same safety net. They’re going to feel the pain a lot sooner and a lot more harshly. ‘

Materials, including steel and timber, are having the most significant price surge due to international demand and lack of supply. Electrical products, PVC, and roofing materials are also getting more expensive. 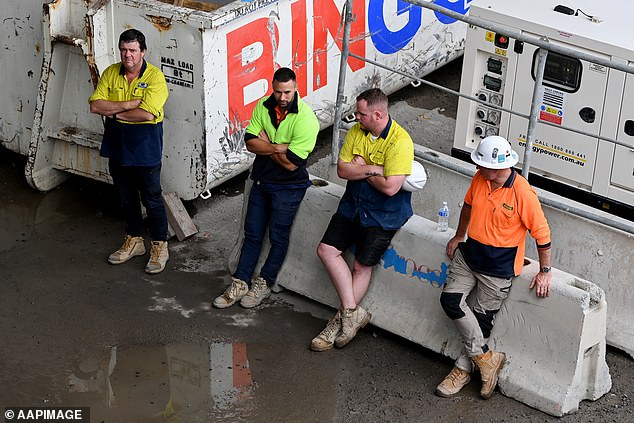 Margins are also significantly decreasing, with the construction industry generally only earning profits of between two and four per cent.

Mr Mackey said contractors were feeling the pinch after locking themselves into agreements months before the cost of rose materials, so they had to bear the weight of the difference and make only razor-thin profits or even a loss.

‘Some people are blaming the pandemic, some are blaming material cost increases, but there’s a bigger issue and it’ll affect just as much the bigger companies as the smaller businesses,’ he said.

The market is trying to respond to the volatility. It’s less now about supply availability, but energy costs are going through the roof, commodity prices continue to rise and material costs are still increasing. 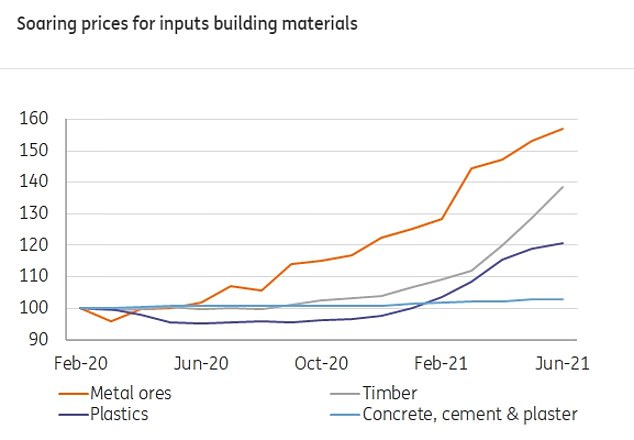 Prices of materials have been rising steadily since the start of the pandemic, but exploded in April and May last year (average prices of commodities – Arcardis statistics)

‘Contractors, particularly trades, are going to be struggling. If they’ve already signed a contract that doesn’t allow for fluctuations in materials, they’re going to be stuck with those prices.

‘If costs have gone up in six months, they’re going to have to bear those costs, and that’s the issue,’ Mr Mackey said.

The rising cost of structural steel has wide-ranging impacts on the market and means inflation is trickling down to Australian tradies.

‘If iron ore goes up, that has a direct impact on the cost of steel. That is passed down to the person who’s providing the materials and that is passed to the contractor, ‘he said.

The Arcadis director also said the lingering effects of the Suez Canal blockade, where the 400m, 20,000-container Ever Given was stuck for six days, were still affecting the market. 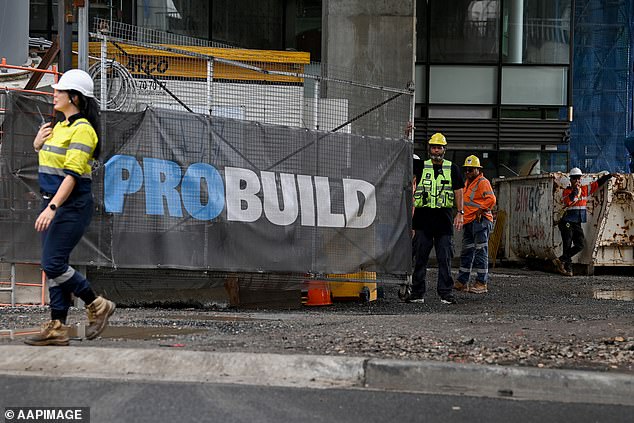 Brisbane-based Probuild is one of the building companies to collapse in Australia in 2022. Pictured is a Probuild site at Darling Harbor in Sydney

‘You wouldn’t believe one ship blocking a river would create such a shortage. That impacts transport costs, ‘he said.

Rising costs are also believed to have fueled the collapse of major construction firm ProBuild, as the company owed $ 14 million to workers for its doomed 443 Queen Street project in Brisbane.

The chief executive of South African parent company Wilson Bayly Holmes-Ovcon that owns Probuild said there had been ‘red flags’ years ago.

Wolfgang Neff told an interim results presentation last week that in hindsight operations in Australia should have been abandoned a lot earlier.

‘If we knew everything we know today we would have pulled the plug years ago,’ he told the Herald Sun.

‘The reality of it was the exposure in terms of the guarantee facility over the last 18 months restricted this decision. The risk versus reward became untenable. ‘ 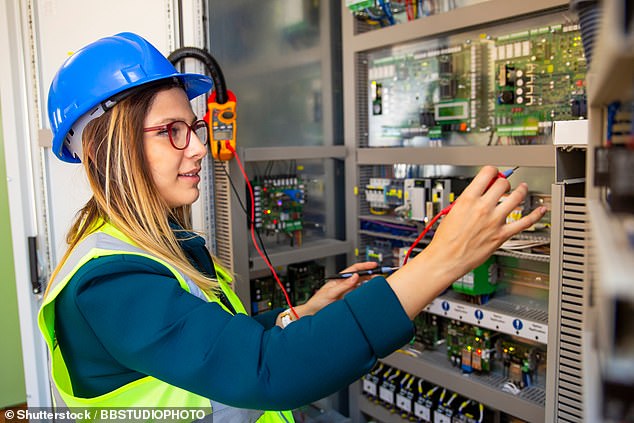 Last month, it was revealed ProBuild owed 786 employees across 19 projects $ 14million, and even more to its 2,300 creditors.

‘With building contract prices locked in, the large and unanticipated surge in the price of many building items such as timber and steel-based products meant that some builders were finding the cost of completing works more expensive than expected.

‘In many cases, this can make loss-making projects,’ she said.

‘MBV has stated that labor shortages will also impact building and construction insolvencies in Victoria over the coming months.’ 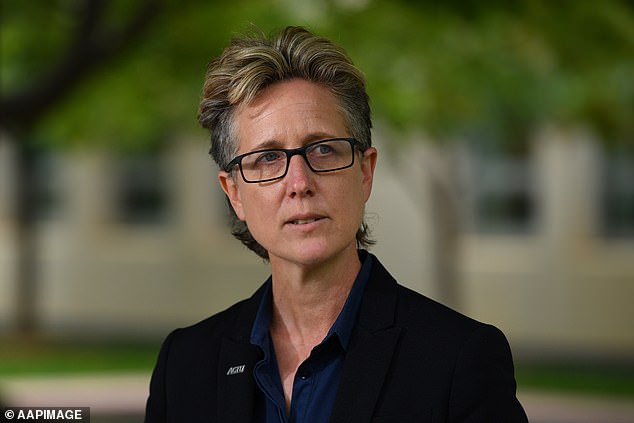 ‘The Morrison government has been nowhere to be seen when it comes to fixing wages growth and this inaction is now a huge weakness for the whole economy,’ she told the Daily Mail Australia.

The pandemic is not to blame. With the cost of living going up and wages going nowhere, a worker earning $ 68,000 last year received a pay cut of $ 832.

‘As one of the largest employers in the country, the Prime Minister could immediately take action on this by sending a signal to other employers and giving his own workers a pay rise, but instead gave them a real wage cut,’ Ms McManus said.

Probuild owes $ 14million to its workers and unknown amounts to more than 2300 creditors as the Federal Court was told the embattled building construction giant is in a ‘nightmarish’ situation.

More than 1,000 directly employed workers’ livelihoods are in jeopardy – along with contractors and sub-contractors across a long supply chain – after the firm was placed into administration by its South African parent company last week.

Barrister Hamish Austin, acting for Probuild administrator Deloitte, on Wednesday told the Federal Court that 786 workers across 19 different projects were out of pocket.

He said the best-case scenario was to maintain operations while a buyer was sought.

But he said administrators needed more time to identify who owned all sorts of things from tools and scaffolding to leases.

‘The mind boggles at the amount of work the administrators are required to get across,’ Mr Austin told the court.

‘And you’ve got the nightmarish prospect of construction projects ongoing in real time, (with) any disruption likely to be extremely costly.’

Mr Austin added that about 300 more creditors had been identified this week who appeared unaware of a planned meeting on Friday relating to the administration.

‘We don’t want a meeting where we have a significant body of creditors who aren’t present,’ he said.

Justice Jonathan Beach granted an extension for the administrators to locate all relevant property and creditors.

Two other businesses under WBHO Australia – Monaco Hickey and WBHO Infrastructure – were also placed into administration.

Deloitte is planning a sale and recapitalization process to secure a new owner for the businesses.

‘The protracted effect of COVID-19 has delayed any meaningful economic recovery and procurement activity in Australia,’ the firm said.