The Massachusetts-based firm said a single dose would be administered to 560 participants.

They will then be monitored for side-effects and an immune response against the seasonal menace in the Phase 1/2 trials.

The shots — dubbed mRNA-1020 and mRNA-1030 — have been designed to target several flu strains, including the H1N1 type known to cause pandemics.

They are the second and third mRNA-based flu vaccines from Moderna to enter clinical trials, and the only ones to target two types of spike protein, which the virus uses to invade cells. 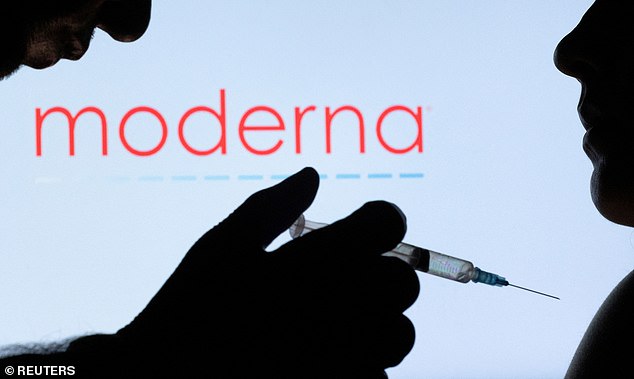 The shots — dubbed mRNA-1020 and mRNA-1030 — are the only ones to two types of spike proteins, which the virus uses to invade cells. Others target just one (stock)

Vaccine manufacturers are racing to develop an mRNA-based flu vaccine after the technology was successfully deployed in Covid jabs.

Current flu vaccines using weakened or inactivated pathogens are only around 40 to 60 per cent effective against infections with the virus.

They say the vaccines have less mistakes in their code because they are made in a lab rather than in eggs like current shots, which may improve protection.

How deadly is flu?

The number of people who die of flu, also called influenza, varies from year to year.

Flu is divided into different strains, Influenza A is more deadly overall, particularly for the elderly and young children, whereas influenza B outbreaks generally result in fewer fatalities

How many people actually die of flu each year in the UK is complicated because of flu and pneumonia deaths are often recorded together.

It is estimated that in a bad season flu will kill 30,000 people in the UK.

Jabs using mRNA technology could also be developed on a later schedule than the standard yearly vaccines.

Traditionally, manufacturers start making their annual flu vaccines for the coming winter in February, when the World Health Organization publishes its estimates of the season’s dominant strain.

But because mRNA can be easily tweaked, some scientists say jabs using this technology could be manufactured as late as May.

Moderna has not said which countries the jabs will be tested in for the Phase 1/2 clinical trials.

They are targeting spike proteins made from hemagglutinin — a type of spike protein the virus uses to invade cells.

But, unlike other shots, they will also target neuraminidase — which the virus uses to release itself from a host cell in order to invade another.

Moderna’s chief executive Stephane Bancel said the company was ‘pleased’ to have begun using mRNA technology in its flu vaccines.

‘We believe that by targeting (Flu spike proteins), we can achieve broader immunity and higher vaccine efficacy against circulating influenza strains than traditional influenza vaccines,’ he said in a statement.

‘We expect our platform’s flexibility in targeting multiple strains coupled with our ability to manufacture quickly will facilitate production of a vaccine that matches the predominant circulating influenza strain.’

Other companies including Pfizer and Sanofi are also working on mRNA-based flu vaccines.

Pfizer’s jab entered phase 1 trials in September last year, with results yet to be released, while Sanofi’s is being moved to Phase 3 trials.

Covid has led to a revolution in vaccine production, after countries invested heavily in the technology alongside traditional methods.

More than nine in ten Covid vaccines dished out in the US used the mRNA technology, or 545 million doses.

Flu leads to as many as 650,000 deaths every year worldwide and up to five million severe cases needing hospital attention.

How do mRNA vaccines work?

So-called mRNA vaccine technology is at the heart of this advance – the same technology that is used in the Pfizer and Moderna Covid jabs.

Short for messenger RNA, mRNA is found inside cells: it’s the genetic code the body uses to produce proteins, molecules that form the building blocks of new cells, hormones, enzymes and other compounds.

The vaccines work by introducing man-made mRNA into the body, programmed with codes that instruct it to produce specific protein molecules.

In the case of the Covid vaccines, the injected mRNA tells cells to produce versions of the spike protein that covers the outside of the Covid virus.

This is harmless, but helps prime the body’s immune system to fight the infection, stimulating it to create antibodies that ‘recognise’ the Covid spike protein.

It means the body is ready to fight real Covid viruses, should they ever try to invade.

This is a completely new way of creating vaccines.

Conventional vaccines work by injecting parts of a virus itself to ‘teach’ the immune system to begin producing antibodies.

The mRNA method is both a faster and more affordable means of developing vaccines, because the vaccine doesn’t require any live biological components like conventional vaccines do.

And, significantly, mRNA vaccine technology could, in theory, be used to engineer any protein the body needs to boost immunity and fight diseases such as cancer or rare genetic conditions.